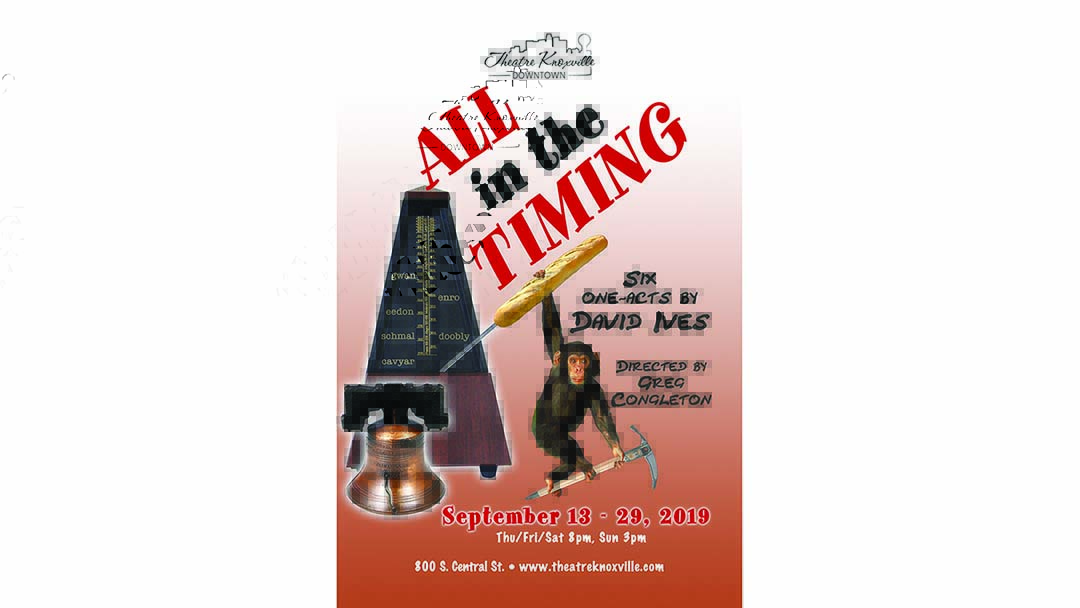 All in the Timing
by David Ives

Featuring six diverse but equally hysterical one-act comedies, David Ives’ All in the Timing is a witty, romantic, absurd, and existentially-minded evening of theatre.

In Sure Thing, a couple on a first date has the opportunity to reset and try again each time they say the wrong thing. Words, Words, Words takes the “infinite monkey theorem”– the idea that given enough time, three monkeys in a room could eventually compose any given text, including Shakespeare’s Hamlet — and turns it into reality. In The Universal Language, a shy young woman places her faith in her fraudulent language tutor, who is changed for the better when he discovers the language they share: not the the made-up “Unamunda” that he professes to be fluent in, but rather the language of love. Philip Glass Buys a Loaf of Bread is an existential mini-musical parody based on the work of composer Philip Glass. In The Philadelphia, a man discovers that he’s entered a strange pocket of the universe where the only way to get what he wants is to ask for the opposite. Finally, in Variations on the Death of Leon Trotsky, the audience is treated to the hilarious vision of the famous Marxist waxing poetical — and dying, over and over and over again.

“Like sketches for some hilarious, celestially conceived revue. The writing is not only very funny, it has density of thought and precision of poetry … ALL IN THE TIMING is by a master of fun. David Ives spins hilarity out of words.”
—The New York Times

“Theatre that aerobicizes the brain and tickles the heart. Ives is a mordant comic who has put the ‘play’ back in playwright … A wondrous wordmaster.”
—Time Magazine

“An original turn of mind is to be saluted in our tired theatre … A playwright with ideas, his own ideas, in his head is relatively rare. Such a one is David Ives.”
—New York Magazine